Whooooaaaa, things have been busy lately! I check on the blog regularly, and it’s been tough to resist posting some of the stuff I’ve been working on, but I must! In lieu of actual content today, I thought I’d at least let you know that there’s some fun on the very near horizon.

First, I’ll be switching things up soon with a review of the latest movie from Kojiro Abe, AKA Jules Carrozza, Alison in Wonderland. It’s his first feature, and he’s been a long-time subject of this blog in both its current and previous incarnations, so i’ve been meaning to get my thoughts up on that. Much like the rabbit, I’M LATE.

I just finished up my second mini-comic after Slime (there are a few copies left of that!), so I’m hoping to get that printed and out in the wild sometime in early October. I still have to tone the pages and lay it out, but I recently shared a rough B&W version of the cover on Twitter and Instagram. 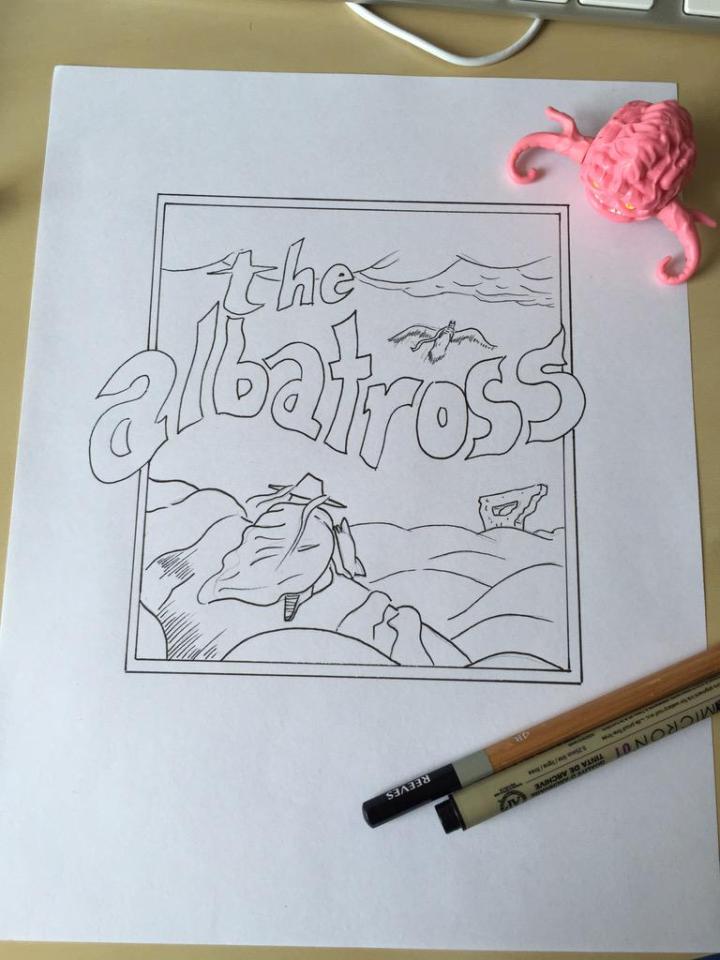 Also, in the interest of having more regular content for YOU, I’ll be starting a new webcomic soon. It’s going to be full-color and packed with action and jokes, but I’m not ready to formally announce it yet. Right now I’m in the process of finishing pages in advance so I’ll be able to keep consistent. I’ll just say you’ve seen the characters on the blog before…

Has it really been almost two years since we last sat down with Jules Carrozza, known to some longtime readers of this blog as Kojiro Abe? Yes indeed, and his first feature, Alison in Wonderland, has still yet to be released. Thus, when Jules stopped by the sewer-grate-steamin’ subhumanzoids back-alley with a new “sneak preview” trailer for Alison, we couldn’t leave him be without answering these questions three.

It’s been a while since we saw any new footage from Alison. When did you add the CG, why did you do it, and who was responsible?

The CGI for the Caterpillar was done early this year. My original idea was to do the Caterpillar totally analog, as a puppet, but I was recording the dubbing with Dave Luce and he convinced me that doing the Caterpillar as CGI was much more economical and then he volunteered to do himself. Dave is a real renaissance man who loves DIY projects. I liked the idea of Dave doing the CGI himself since he does the Caterpillar’s voice, it’s sort of like Andy Serkis and Gollum. I wanted to do as little pick up shooting as possible for this movie given I already had been shooting from summer of 2011 to summer of 2013.

The release date is now set for spring 2015. What’s the hold up in getting this one out there? Is there still more work to be done?

There’s a lot of work to be done and aside from some support from Dave Luce, Aria and a few others, I am doing all the work in-house myself. I am assembling an HD master for the movie and it’s a very long and detailed process. I need to match the cuts I did with the HD footage. The creative stuff is over, now the editing process is entirely mathematical. Plus I’m mixing the film in 5.1 surround sound so there are hundreds of sound effects that need to recorded and added in. I am not cutting any corners here. I want this film to be special. I am aiming to have this film done by late March of 2015 and think I can do it. After that, it’s on to my next project, which will either be another low budget film called Divine Comedy or my long-standing pet project Coup D’Etat, depending on how lucky I get.

You recently posted publicly about dealing with depression and struggling with an existential crisis. Are you any closer to answering the question, “Is this it? Is this all life has to offer?” *pulls chair closer* What’s going on, Jules?

I don’t wish to talk about this much, but I’ll tell you this: you could say I am finally starting to realize my mortality and life is seeming pointless at times. It’s partially because I’ve been working on the same movie for the greater part of a decade, partially because I gained weight and am suffering from health problems caused by it, partially lady problems. I quit smoking recently as well and am withdrawing from nicotine and feeling morose as heck. But I am really eager to get my life back on track again. I was almost arrested recently for getting in an altercation outside a bar and that really shook me up and was a wake up call for me. So the first thing I did the following day was quit the death sticks which I had started again because I was stressed out making Alison. So yeah, I’m hoping things turn around.

Thanks as always, Jules, and good luck with wrapping up your first big film.