Before Mario did triple-flips and shouted “Wahoo!” like he just sucked every last drop of helium from our planet, he was a surprisingly gruff, perpetually hungry, and somewhat idiotic cartoon plumber who lived with his brother Luigi in the Mushroom Kingdom by choice. Surrounded by what, according to my current count, adds up to roughly one million pipes that lead straight back to Brooklyn, the Mario Bros. held their hands up, pursed their lips, and shook their heads “NO!” like a kid shoving away a plate full of brussels sprouts.

Are you listening, Nintendo? Because you’re gonna have to work the following into your games as soon as this list goes live.

The Wizard King of the West

Super Mario Bros. 3 was full of kings, all of whom Bowser ruthlessly mutated before taking over their respective kingdoms. From what I can recall, though, there was never a giant-snail-riding Wizard King of the West. The lore implications are especially deep with this one. In “A Toadally Magical Adventure,” the Wizard King grows impatient after waiting 50 years for his magic wand to be crafted. He sets off from his castle atop his steed—a massive snail that looks like he just took the most righteous of bong rips—with the hurried and desperate exclamation of “Faster, Lightning Bolt, faster!” Unfortunately for the Wizard King, Toad ends up getting his pudgy little hands on the wand first, and he’s not exactly known for his impulse control.

From what we can gather in his limited appearance on Super Mario Bros. 3, this king can pretty much see all with his crystal ball and do all with his wand. Why, then, does he resort to such meandering means of transportation? Why does he continue to use the services of the Ace Magic Wand Factory if it takes them 50 years to make the type of wand literally every other ruler in the land seems to have within arm’s reach? Why isn’t he in Super Smash Bros. Ultimate?

Professional wrestling is an oft-neglected aspect of the Super Mario Bros. universe, but it’s definitely there. Paper Mario: The Thousand-Year Door proved it 14 years ago with the introduction of Rawk Hawk, AKA the Feral Nuclear Reactor. But where are all the totally ripped inhabitants of the Mushroom Kingdom? The version of wrasslin’ in Super Mario Bros. 3 is even more enticing, serving up a pair of contenders that look like Toad had his genes spliced with the Bushwackers. Enter the Mushroom Wrestling Federation’s Mushroom Marauder and Jake “The Crusher” Thunder, a duo destined to be the stars of “Tag Team Trouble”—one of many episodes penned by my personal favorite SMB3 writer, Martha Moran—were it not for the infernal meddling of the Koopa Kids.

In another nefarious plan, Cheatsy Koopa—which is the cartoon’s switched-up name for Larry—wakes the duo up in the middle of the night, clips their eyelids open, and uses the power of hypnosis to put them right back to sleep for two whole days. Who could possibly take their place and hope to win the million coin prize up for grabs at tomorrow’s big match? Will Toad ever be able to face those poor orphan mushrooms when he thinks he lost their latest batch of donations? Why aren’t these guys in Super Smash Bros. Ultimate?

In Super Mario Bros. 3, pipes to the real world don’t just lead straight back to hot spots like Brooklyn or a Milli Vanilli concert. Toilets, doors, and even highway tunnels have infinite possibilities within them, even if your final destination happens to be a maximum security prison. That’s where Koopa and his constantly caterwauling kids go when everyone’s favorite baddie decides to break a convicted felon out of prison just to teach his whole fam a lesson. With the help of Crimewave Clyde, Koopa’s kids will become meaner, nastier, and just plain badder than ever before.

Best of all, the plan works so well the Koopa Kids get carried away. Before Crimewave Clyde knows it, they’re robbing each other and planning a billion-coin heist from the local treasury. Between this and the fact that they’re really annoying, it doesn’t take long for Clyde to happily turn to the Mario brothers for assistance. There’s no way he’s the first criminal Koopa has recruited, thought, right? How many historically significant badniks have come over to the Koop side in the past 30-plus years? Why isn’t Crimewave Clyde in Super Smash Bros. Ultimate?

A deep and twisted Mushroom Kingdom legend tells of a treasure said to possess great magical power: The Doom Dancer Music Box. As the Princess explains, cranking it fast makes everyone in the vicinity dance faster and faster. Crank it slow and it makes them slow down and stop. Mario chimes in right away, suggesting they use the music box to “keep King Koopa and his brat pack under control,” as if that wasn’t exactly what the Princess was about to say.

The act of obtaining the box is definitely a late-game Mario stage. The adventure takes them to the Temple of Gloom in Dark Land, home to what is without a doubt the most terrifying depiction of Dry Bones imaginable.

Did they stop to think what would happen if Koopa got his own hands on the Doom Dancer Music Box? No, of course not. Thanks to this unfortunate turn of events, the audience is introduced to the episode’s title track, “Do the Koopa,” to which the entire Mushroom Kingdom is soon in thrall. This is one of about twenty original songs sung by the voice actors behind the Koopa kids, all of which are certified bangers. Odd, then, that “Do the Koopa” isn’t included as one of over 850 music tracks in Super Smash Bros. Ultimate.

Guillermo del Toro showed us what the shape of water was in 2017’s Academy Award-winning film Sex Fish, but Super Mario Bros. 3 had this covered nearly 30 years ago. In the rudely titled “The Ugly Mermaid,” Mario ends up getting trapped in a cement block while swimming around in his frog suit. It wasn’t even the handiwork of Crimewave Clyde, it was that dastardly King Koopa! Before he dies the type of grim death Nintendo loves showcasing whenever Mario drowns in one of his games, a mermaid comes to his rescue. But this isn’t just any mermaid, it’s a reverse mermaid named Holly Mackerel, which means—cue the chorus—she’s got leeeeeegs.

Because she can’t see so well in her air-filtering fishbowl helmet, she believes Mario to be a helluva hunky frog. Mario rebukes her advances, even when she brings up the possibility of a royal wedding, but Holly leaves an indelible impression on the audience nonetheless. Why is this the first time we’ve heard about reverse mermaids in the Mario universe? Is Holly technically a sub-species of Cheep Cheep, or does she fall into the Big Bertha family of Mushroom Kingdom sealife? Why isn’t she in Super Smash Bros. Ultimate?

In My Frog Suit!

There are so many bonkers concepts in The Adventures of Super Mario Bros. 3 it’s exhausting, but most of them just highlight how much ground the games themselves have already covered. There is one final item from the cartoon that will never, ever be topped on a Nintendo console today, tomorrow, or in a thousand years, so it’s not fair to sincerely suggest it. Try as Nintendo might to make a musical out of games like Super Mario Odyssey with Pauline’s excellent “Jump Up, Super Star!” song, nothing gets close to the chops of the Koopa Kids. And nothing in this cartoon could possibly soar higher than “In My Frog Suit,” a chart-topper from the “Mush Rumors” episode.

It begs the question: Why did this beautiful, stupid, absolutely canonical cartoon only last for 26 episodes? It’s not too late to right this wrong and make everything in the Mario 3 cartoon an integral part of the greater Mario universe, and it’s definitely not too late to dump it all in Super Smash Bros. Ultimate. You put in a Piranha Plant, Sakurai. You can put in a sex fish.

This article originally appeared on the VRV blog.

Please enjoy my latest article on the VRV blog, Five Pieces of Lore from the Super Mario Bros. 3 Cartoon That Must Be Canonized.

It is highly academic.

I was going to wait to post this until the next comic update, which is almost done, but I gotta strike while it’s hot! Episode 02 of subhumancast went live last Friday, and I do believe it is quite the aural treat.

Listen as Canaan and I discuss The Noid, our Amazon browsing history item of note, the best non-platforming Mario games, and much more on the opposite of a sophomore slump.

subhumancast Episode 02: Revenge of the Noids

Hey, guess what? Subhumanzoids has a podcast now! That’s right, subhumancast is here to blast out a regular dose of myself and co-host Canaan Schladale-Zink as we jabber about video games, movies, comics, and whatever else happens to cross our path that week.

My wife and I recently moved from New Jersey to South Carolina, hence the lack of updates, but I’ll finally have many more regular posts and comics coming soon! For now I want you to plug your ears into the debut episode of subhumancast!

You can also subscribe to subhumancast on iTunes, with more sources on the way!

I’m leaving for Dublin again in a few hours, so subhumanzoids will soon be broadcasting from overseas once more. In the meantime, I leave you with the watercolor painting below, which I did for a commission last month. 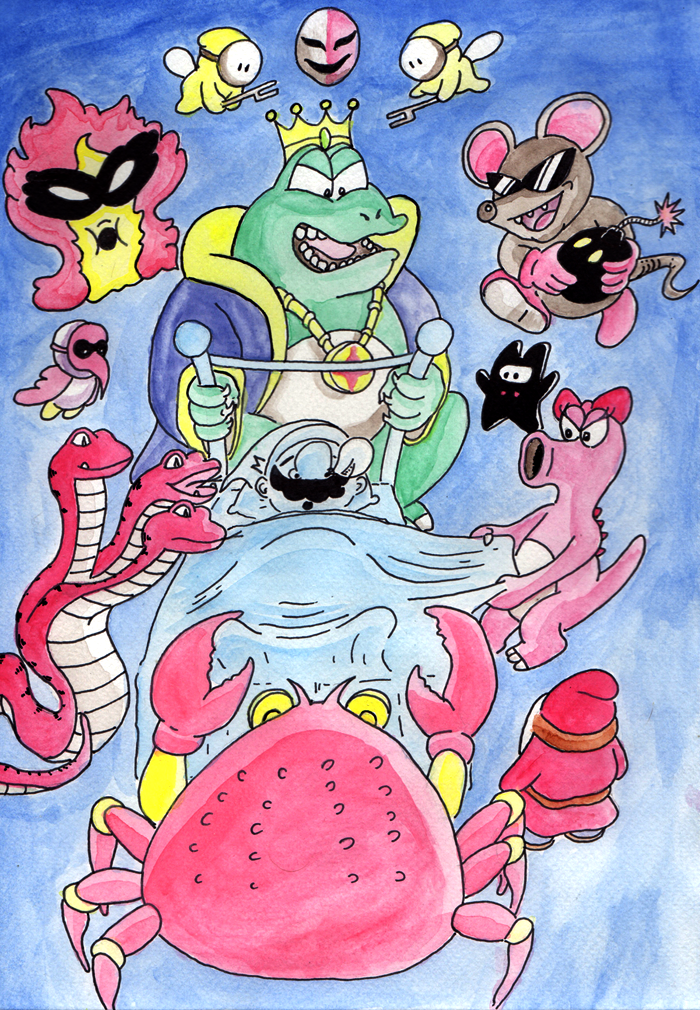