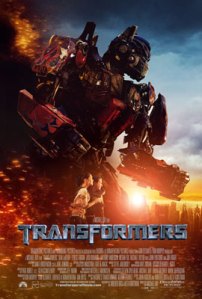 It’s Tuesday, which means Transformers has come and gone for the especially nerdy and/or intrepid opening night enthusiasts. However, those that truly absorbed Bay’s explosive take on the toy-selling franchise will probably want to go back for seconds or thirds.

Truthfully, it’s hard to take it all in in a single sitting, even at 2 hours and 20 minutes. Even during the stretches in which robots are nowhere to be seen, you will be thinking about robots; plotting out in your mind the many ways that these behemoths will pummel one another in an upcoming scene.

The rest of the time, you’ll be wrestling with the reality that you are, in fact, witnessing a live-action Transformers movie. I don’t think this really hit me before the Autobots first banded together and “rolled out.” It’s a startling revelation, that’s for sure.

Aside from the incredible and seamless special effects, the movie’s greatest strength is that it never takes itself too seriously. Heck, it’s actually a pretty funny movie throughout. The giant HASBRO credit at the beginning is there to remind you that, like in the cartoon, the Transformers are essentially auctioning their shiny bodies off to each viewer, displaying blister-packaged action figures writ large.

Some will complain about the way that the action is shot, to which I will assume they have never seen a Michael Bay movie before. There’s a lot of wild, close-up shaky-cam action, and most of it serves to rub up and down the audience’s collective shaft right before blowing out a massive money shot.

Some will also have beef with the breaks between giant robots beating the tar out of each other, but I have enough faith in humanity to believe that these caveats will be crushed eternally once the flick kicks into what is, hands down, the most jaw-dropping final act that will be projected onto screens for the rest of the year.

For my money, “Bay dunnit.” I don’t know what else I could have wanted from a live-action Transformers movie. I think, were it a hair nuttier, it would be Bay’s very own Final Wars; it’s ridiculous enough, so maybe it just needed guys in rubber suits to take it home.