Lest you start to believe that Monster Month is all about entertaining TREATS provided by Joseph, I’m here to provide you with a dastardly trick.
Our story starts with a routine trip to the local CVS, with your young hero in need of deodorant (old spice red zone). Little did I know that this routine errand would lead me down the ghoulish extravaganza that is the Seasonal Gifts section (aisle #4, I believe)! It was there that I found several pieces of fiendish accessories, including these bad boys:

Let’s take a closer look though, where you can see why these arachnids truly caught my eye! 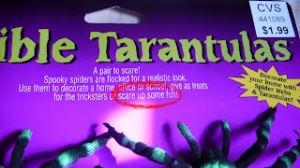 This little piece of tantalizing copy got my brain moving. If only I had a hapless mark to play a trick upon. An innocent b(l)umpkin who’s mind has been slowed by the previous night’s debauchery. Luckily, I share an apartment with one such character: Patrick “Nugget” Sanders! Quickly, I plucked the package from the rack and got in line with embarrassed girlfriend in tow.

Once home, I discovered that Nugget had arisen from his slumber and gone outside for a smoke. I seized the moment, and placed my new friends in places befitting of large spiders looking to sink their fangs into pasty young men:

Wait a tick, what’s this?

If there were any doubts as to whether or not my victim was deserving of a bone chilling scare, the gay love notes left on his desk erase them. What a dork.

The trap has been set. Now to go photograph my target while planting the seeds of of a potential tarantula infestation in our apartment. As I casually walk outside, Nugget is immediately suspicious of my camera:

“You aren’t taking pictures of me are you?” he asks. “Of course not Nug! I am simply out here taking pictures of my dog!” I respond. Speaking of my dog, I begin to spin a yarn. I ask if he had heard my pup (Rocky) barking this morning, and go on to tell him that I saw him chase a spider under the fridge. Nugget’s curiosity is piqued because, just like any warm-blooded American man, he is scared of spiders.

I continue the discussion. “It was so big, at first I thought it was a mouse! Perhaps we should call an exterminator.” I sell the idea to him well.

Visibly shaken, Nugget heads inside to begin his day. As he enters his room there is a deafening silence, followed by a sickly sounding “DUDE.”

I do not reply. One more time I hear it: “DUDE.” Later, Nugget confesses to me that his heart skipped a beat. A deadly tarantula residing beneath his computer desk! The place where nugget works, consumes media, and beats off could very well have also been his tomb!

I run in to photograph Nugget post-trick, then immediately get on the phone to report my victory to Joseph Luster himself, who then suggests I share my mischief with his viewers at home. Rocky rejoices by trying to eat the fake spider.

One thought on “Monster Month: TRICKS!”