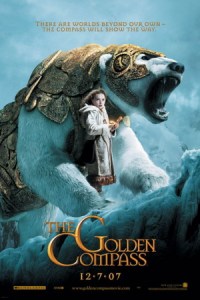 I wasn’t originally planning on checking this out, but ended up being wowed by a briskly paced, no bullshit adventure flick. The cast itself is insane, with Sam Elliot, classic cowboy drawl intact, flying on the same airship as an alcoholic armored polar bear played by Ian McKellen who has to battle Ian McShane while Christopher Lee plots elsewhere.

The effects are really great, too. I think the animal animations are even better than Narnia‘s. I don’t care about the limp controversy and I’ve never read the books, but the flick made a kid in the row in front of me bawl a couple times, so it did something right.