Or Dragon Wars or whatever it’s called (not to be confused with the tale of Spondylus’ fall), delivers. It’s like a twelve year-old’s brain vomited all over the screen and the resulting mess was vomited back and forth between two other twelve year-old’s in a middle school theater group’s performance of Two Girls One Cup.

Face it, folks, no other film has so accurately depicted what it would be like if a bunch of dragons and lizards with cannons on their backs faced off against tanks and fighter jets. Not since I, myself, was the tender age of twelve have I vividly imagined a Composition notebook spilling onto the floor, its ink and pencil shavings tumbling from within the pages, forming physical dioramas of mildly retarded destruction.

Go, rent it, watch it in the highest of definitions and remember: Robert Forster is everywhere. 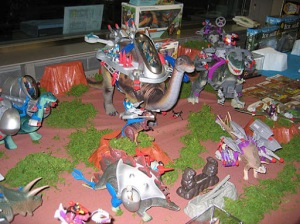