From here on out this will be known as the GGNQR, for brevity’s sake, so get hip with the abbrev(iation) before it’s too late!

In Hero and the Terror, Chuck Norris plays detective Danny O’Brien, an unsurprisingly powerful cop that sticks to the books while still delivering a helluva haymaker when duty calls. However, he’s haunted once again by a recurring nightmare he thought he had shaken and left to die in the past.

O’Brien is known as a “hero” because of his legendary take down of serial killer Simon Moon, widely known as “The Terror.” In his dreams, though, we see he’s not quite the hero everyone thinks him to be. His apprehension of The Terror was a fluke, a lucky knockout. O’Brien was hanging onto life by the skin of his teeth during their below-dock showdown, and fortune just happened to shine on our hero that day.

Well, now he has the chance to set things right in his mind, because The Terror has broken out of jail and is ready to start his bloodletting saga anew, killing women and playing with their bodies in his secret hideout. Will O’Brien be able to end this villain’s reign for good, or will he be forever sentenced to drown in a sea of self-doubt and regret?

Since this is Chuck Norris, expect a lot of casual ass-kicking that makes everyone else on the force look like an absolute pussy. At times, Hero and the Terror slows to a crawl, and in general it feels more like a pretty decent TV movie than something that rocked the theaters in ’88. I’d tell you more about the specifics of its release, but it doesn’t even have a Wikipedia page. 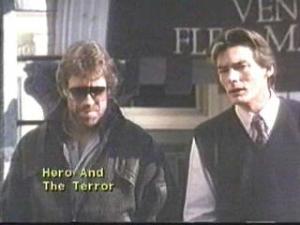 Norris is Norris. He fluctuates from being genuinely badass to looking like someone’s old, unhip dad that just might get a chance to “lay his honey” in the sack tonight. They probably could have excised a lot of the stuff about his homelife, because I don’t remember his lady ever being in peril, and he could have been a bit cooler if he was picking up random dames at night and having them comb his beard and play with his belt buckle. Sure, it shows that he has something to live for and someone to protect, but none of it is very interesting, and his woman is as dull as can be.

Jack O’Halloran, who has played such memorable roles as “The Big Man” in Perry Mason: The Case of the Defiant Daughter, portrays the borderline retarded Terror. He snarls and throws punches like a very drunk Lou Ferrigno, and is probably at his best during the breakout scene, prior to which I’m pretty sure he’s drawing something with crayons. Also, for what it’s worth, Billy Drago is in this, as well.

Hero and the Terror certainly isn’t something I’d beg you all to hurry and add to your queue, partly because I’d prefer you stay on my site, and partly because it’s a middle-of-the-road Norris flick. If you’re yucko for some Chucko, I’d recommend the last movie of his I rented, Lone Wolf McQuade, over this one. I leave you with the trailer:

I swear to God, I will delete any Chuck Norris meme replies with the wrath of a thousand snarling and snapping hydra heads*

*I probably won’t really do this. Hell, I don’t even delete spam.

One thought on “Galactic Ghetto Netflix Queue Review: Hero and the Terror (1988)”