Welcome to Scanline City, the only metropolis in which it is illegal NOT to constantly talk about awesome arcade games long buried beneath the previous civilization’s rubble. For those of you that have never had the luxury of visiting such a sprawl, it looks something like this:

Today’s order of business hails from the good year 1990, back when Fly Girls had naught to do but shake their asses, their inhibitions not yet restricted by our future world’s harsh decency laws. In that fantastic year, developer Toaplan released an arcade game called Out Zone, a title that I dove into last night with a properly equipped wingman in tow.

Now, I’m not quite sure what an “Out Zone” is, but if the game’s contents are anything to go by, it’s a ruthless landscape of war and violence, punctuated by killer robots, aliens, and an ever-dwindling supply of energy with which you must power your killing machine of a body. Even Wikipedia can’t save us with their special brand of synopses, so you’re on your own if you ever find yourself in The Zone.

Out Zone basically plays like a normal shooter with buff lads taking the place of aeroplanes and spaceships. What makes Out Zone unique is the level design and power-up system, the latter involving a couple of weapons that can completely alter the way you play through the stages. While the initial weapon allows full 8-way shooting, making it sometimes difficult to hold fire on a single enemy, one of the power-ups gives the player a three-way shot that keeps them in a strafing position, ideal for blowing away pretty much everything in your vertically-scrolling path.

The level design is way beyond something you’d normally expect from an arcade shooter. Stage schematics play out more like they were designed for the third dimension than a simple 2D screen-scroller. Paths diverge into alien hallways that look, well, pretty much like you’d expect an actual alien stronghold to appear. Enemies pour out of adjacent rooms and, later on, moving bridges cleverly sway back and forth across bottomless chasms that were obviously designed to confuse the architects themselves. 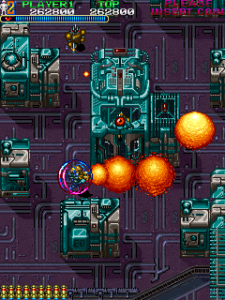 Bosses range from mechanical monstrosities that wouldn’t be out of place in more traditional shooters to wall-bound machinations that are straight out of a top-down Contra level. One of the more memorable encounters has one of these very constructs zapping off sections of the floor beneath you with the power of an almost surgical laser beam.

And your reward for conquering the Out Zone? A screen that congratulates you and urges you to play the Extra Game! Quickly, though, there’s no time to decide, because Level 1 boots up immediately and you’re right back in the thick of it, saddled with a single chance at success. Perhaps this is indicative of the Out Zone’s crippling curse, its denizens forced to roam the grounds in an eternal Groundhog Day loop.

It’s hard to resist such a call to arms, and that’s because Out Zone is legitimately an awesome arcade game. Picture something like Ikari Warriors if Ikari Warriors was actually really fun. Give it a constantly-repeating spin on MAME until you find a copy of its sequel, Fix Eight, and check out some more screens (and probably some actual information) on this site, one of a few from which I thieved images.