I’ll start this off by paraphrasing Raul Julia as M. Bison in the 1994 Street Fighter movie. For you, the day Joseph graced your SFIV Tournament was the most important day of your life. But for me, it was Saturday.

It’s true, Street Fighter IV‘s rabid grip on the world has extended to Hoboken, NJ, and the tiny, nook-like Gamestop here participated in the nationwide tournament this past Saturday at 2pm. Having spent a decent amount of time preparing, I went to the store with Pat and Dan, each of us certifiably Tuff E Nuff to roll with the rest of The ‘Boken. 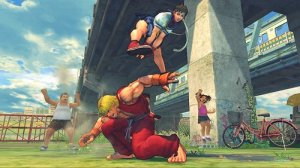 Being roughly the size of my bedroom, which in turn is roughly the size of a thimble, there were only about thirty people that could safely fit in the back of the Gamestop, but each represented a crucial slice of the gaming spectrum. There was, for instance, Strange Black Guy That Talks Like Baby Huey and, for your pleasure, Meth-Addled Brian Crecente. I’ll simply call my third round opponent “Fing’r Les Mittens,” because that is precisely what he wore while fighting me.

Yes, The Good, The Bad and the Sweaty were out in full force, and they were the only thing standing between us and the Round 1 prize: a headband and some armbands.

Once the dust settled, we left headbandless (it’s okay, I already had one) but with great enthusiasm. Dan got knocked out in round one, Pat made it to round three, and I made it to the finals only to be knocked out in the last round of the match by my opponent’s Sagat. “I almost won Hoboken,” I exclaimed to all that would listen, but no one cares about almosts and couldas when a Round Two trip to the luxurious Lyndhurst, NJ Gamestop is on the line.