If you can’t get enough of me on the Internet (I mean, gosh, I know I update this blog way too frequently for you all to keep up with it), then perhaps you’re asking yourself, “What’s the latest haps on Luster in Print?” 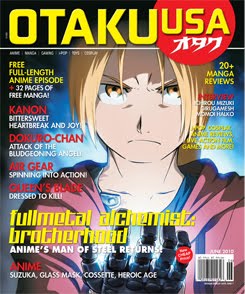 First, I have to insist you all go pick up the latest issue of Otaku USA! Not only does it have lots of hot tamale articles, it’s our third anniversary! Some Luster content includes the always immaculate Games section I edit (my review du jour: Capcom’s Tatsunoko vs. Capcom), and a feature on the Air Gear anime, which is about incorrigible scamps rollerblading as if their very essence was fueled by playing way too much Jet Set Radio.

There are also lots of other great articles by people that aren’t me, but this is The Joseph Luster Report, not The Other People on the Internet Report or whatever.

If one magazine alone can’t satiate your lust for Luster, by all means pick up the latest issue of Sci Fi Magazine. You can read my all-Luster-most-of-the-time Games column therein, including reviews of Bayonetta, Dark Void and more. Even more action-packed, though, is my feature on the Prince of Persia movie. I talked to Jake Gyllenhaal, Jerry Bruckheimer, and Persia-creator Jordan Mechner to bring you the most sandswept satchel of big-budget boastfulness possible.

Don’t tell ya mama, but you can also probably find me writing about war gamez in each issue of Military Heritage and World War II History. For serious.

Go buy magazines before people decide it’s a “cool retro thing to do”!