I’m right here, hopping on my blog to update about something not related to Castlevania! It totally sucks to be my blog in 2010, doesn’t it? I feel kind of bad for the fella, but I think it’s full of so many kick-ass blog entries that I’m almost intimidated to touch it at times. It’s like I crafted a real babe of a blog and now it’s just shakin’ its hooters in my face and I’m all lowering my shades as if to say “tadow!”

Or it’s like my blog has become cool dog and I just expect it to act cool on its own.
Anyway, it’s really tempting just to jump to the end of those Castlevania stories and move on, but I like to finish things I started properly (which is why I’ll still be drawing Gas Baby when I’m 60 [by the way, let me sub-parenthetically pick a bone real quick. The place I normally host Gas Baby was ComicSpace, but they, uh, I don’t even know. It’s not there anymore, though. I guess that means it’s time to start a proper GB site or something]).
Speaking of proper sites (whoa, I just continued from a parenthetical statement, is that allowed?), I renewed josephluster.com for another two years. Now you vultures can just scram, because it’s mine.
The whole reason I came here to post is because the latest issue of Otaku USA is out. This is the cover. 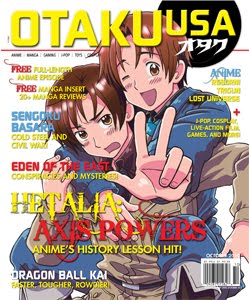 I’d say I “literally know nothing” about Hetalia, the cover story, but that’s not true. I do, however, literally know next to nothing about it and would like to keep it that way. I hear it’s quite popular with the kiddies, though.
I wrote about the following: TV Games, Dragon Ball Z Kai, and the live-action adaptations of 20th Century Boys. Don’t believe me? Peep the TOC. Also peep the site in general, it’s my freakin’ day job.