Ever since I was a wee child jamming away on my Nintendo Entertainment System, I had a profound understanding of what it takes to craft an awesome boss: make ’em massive! Bosses should dwarf the player; the more screens they take up, the merrier. I think I first came to this sexy realization when playing the extremely mediocre Wrath of the Black Manta on NES.

The first boss of this game is a giant bruiser named “Tiny” (get it!?). This might have been my first experience of being humbled by some gigantic gay night club bouncer looking asshole in a video game. 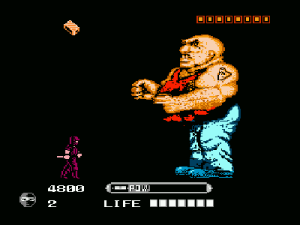 First boss experiences should always be like this. It’s like that joke about seeing your dad’s dick when you’re really young so you’ll always fear its power. The same goes for last bosses– not the dick thing, but that they should be looming towers of fear. Just look at the last boss of Super Ghouls ‘n Ghosts, Sardius! 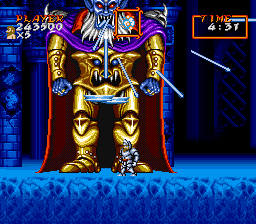 New games are still managing to do this right. Ninja Gaiden has the Bone Dragon, for instance, and who could forget pretty much every battle from Shadow of the Colossus? Size is crucial to injecting the player with fear, folks, but if Jaquio or Sardius ever show you their ding dongs, run!

One thought on “Boss Week: Bigger is Better”