After playing more of each, I think I’m going to have to go with Eternal Sonata for the currently demoable RPG to play this year. While I stand by my thought that it’s tough to demo an RPG (out-of-context battles ahoy), there are many more annoyances with BD that even the dimming shroud of alcohol fails to blanket. 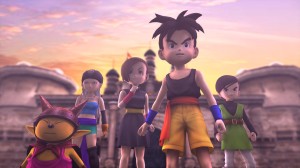 My first exposure was the Fortress level, which was cushioned with some cool boss fights. The other stage, however, shows more of the gameplay pitfalls that I don’t look forward to encountering as much. For one, I don’t really feel like I’m doing anything in battle. Okay, to be more blunt, I have little idea what’s going on at any given moment.

The aforementioned boss fights also do one of my least favorite things: they start off by granting the boss a bunch of turns in which they inflict a bunch of status effects and whatnot. This slows the process down more than anything, but it’s still annoying. The music is pretty rad, though.

Also, there are poo snakes.

But, like I said before, I don’t really think any RPG demos very well. To me it’s like being shown an excerpt from a book. It may be a pretty well written few hundred words, but out of context it’s utterly meaningless. Por exemplo, I don’t know that Dragon Quest VIII would have been the experience it was without the first unforgettable moment when that beautiful music swelled as the sun went down over my party’s caravan.

Therefore, I shall reserve my ultimate and righteous judgment!

One thought on “Battle of the Demos: Eternal Sonata VS Blue Dragon”