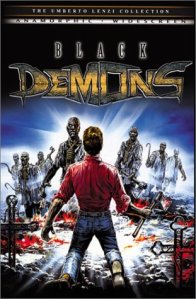 “A black man… he look-a like a zombie!”
This grody 1991 monstrosity is truly one for the books. An American woman travels through Brazil with her brother and British boyfriend, but car trouble lands them in a fazenda under the hospitality of another couple and their voodoo maid, Maria. Of course, this is well after the brother strayed from the pack and observed a wild spirit-evoking macumba ritual, got a necklace from an old, fat black dude with no pupils, and recorded the whole event on his cassette player, becoming possessed in the process.

“It’s clear they intend to kill us all” – “Well I don’t intend to die here like an idiot!”

“I thought Jose’s imagination was running overboard when he said someone used the black magic ritual to evoke the damned souls of six negro slaves.” 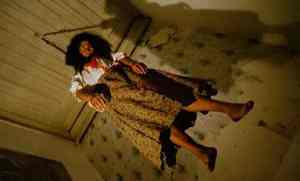 Despite what the bad acting would lead you to believe, the movie is surprisingly tame. As far as Lenzi’s flicks go, Black Demons is one of the worst (heck, even he says it’s awful), but in the realm of black zombie slave revenge thrillers, it’s right on top!

3 thoughts on “The Precursor to Resident Evil 5”