Not to you, Umair, but to the SEGA DREAMCAST. Sorry, but one day you filthy humans will all be nothing but dusty memories and the advent of your births will be no more than earmarked dates on crumpled, fading Garfield calendars.

I think your logo is keen…
Machines, however, are timeless! I’m firm in my belief that once my Dreamcast becomes sentient on its tenth anniversary in 2009, I will be a faithful servant that works only for its sustained life force, questing only for fuel to churn its still beating mechanical heart.

I had a big test the day after the Dreamcast’s launch. It was my first year of college and I screwed around a lot, but never so much as that evening that I waited until midnight for it to pop from Funcoland’s grimy birth canal. I took it home and was wowed by its graphical prowess, titillated by the superfluous visuals on its VMUs, and captivated by the veritable treasure trove of day one titles I had holed away and exploded money upon. 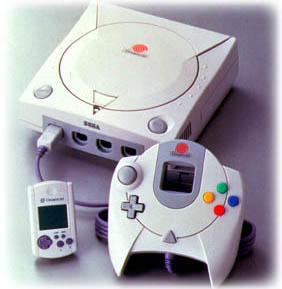 … your firm bodice serene like that of a dream!
Here’s to you, oh fanciful white steed on which I rode into many virtual battles; the saddle that gripped me during over 200 hours of Phantasy Star Online, for instance. I procured some fine pumpkin ale last night, and I will most definitely be toasting to you this eve.

One thought on “Oh, Happiest of Birthdays”