Entry the first: Streets of Rage 2 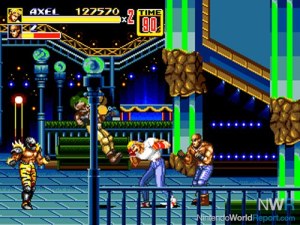 Not only is this game just as awesome as it was when it first came out, it is still probably the best “beat them up” ever created. Just as its genre implies, your goal in the game is to face off against an endless sea of thugs and beat them up. Genre notwithstanding, you’ll never find a better television game starring a vaguely ethnic brute, a handsome white man, a slut and a ’90s-vomit urban youth with inline skates and attitude to spare.

One of the most bold aspects of the game is how relentlessly the bad guys farm bosses into normal enemies shortly after you defeat them in battle. In one of the later levels, you face off against some mace-armed robot bosses and box them to the explosive death. Then, literally within the first screen or so of the next level, the robots appear as normal enemies. Pure brutality!

Just look at this cover, folks. It’s like a decade manifested itself as an artist and painted a “totally stupid” (in the good way) masterpiece. Marvel as the cleverly named black kid, Skate, kicks someone with his skates! I would love to make a completely serious and non self-referential movie called Beat ’em Up starring a roughly similar cast of fore’er-do-wells.

8 thoughts on “Games That Are Still Really Awesome, and No It’s Not Just Because of Nostalgia Pt. 1”