Apologies in advance for the quality of any images on this entry. The pages of these comics are fairly “unscannable.”

I’ve been drawing comics in some form for quite some time. Is this building up to some kind of lesson on the artform? Absolutely not. I’m the last person you want to take lessons from. But surely there are nuggets of some form—be they golden or brown and dotted with the remnants of peanut M&Ms—in these tales of superheroics from the early ’90s.

Like most kiddos of the time, I was absolutely enamored with Marvel. But on an even higher level of influence were the comics of Image, then fairly fresh. Image comics came along and gave everyone my age what they wanted: stronger dudes and more scantily clad chicas. It was like everything we desired from hero comics but way dumber. Image comics like Wetworks made Valiant’s 3D issue of Solar look like stereoscopic Dostoevsky.

Much like the diner, the logo was a real “Sizzler”
If Image comics were working on some subhuman plane of raw entertainment, my own concoction, Spectrum, was the sewer line running far beneath it. Actually, speaking on pure comics artistry, the creative thoughts running through my head at the time were flatline brain frequencies; the bubbling crude of a particularly odious Morlock.
I am, of course, praising myself in an odd way. It’s all I know how to do.
The lineup was savage. Leading the pack was the katana-clashin’ SCAVENGER, who deserves more exclamation points than blogspot allows. Picture an almost charmingly derivative mix of Spider-man, Spawn and Rai and you’ve just about got it. Here he is as he appeared on the first issue of his comic. 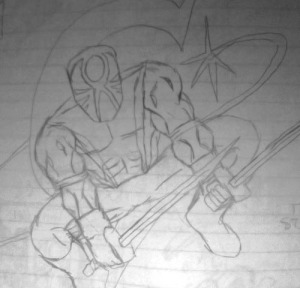 No doubt a candid pose

There were upwards of, like, seven other characters created, but that didn’t stop me from writing a full schedule for the year, which I just unearthed. I’ve transcribed it—word for word, I swear—for the sake of history, and I think posting it below with some pictures will explain everything one could possibly need to know about the wild world of Spectrum.
Of the list, I have about four complete comics that range from 10-15 pages each. A couple are even innovative “flip issues” with one on each side. Both Scavenger #1 and Altitude #1 share such a unique distinction, why can’t you?
A note for those not versed in the lingo of comic book price guides: “I” means that character is introduced, “D” means that character dies, and “O” means that character’s origin is told.
SPECTRUM LINEUP (circa 1993)
* Scavenger #1: “Eye of the Beast” prelude (vs. Sharpshot)
+Altitude #1: “Eye of the Beast” pt. 1 (I: Congo, I: Don M.) 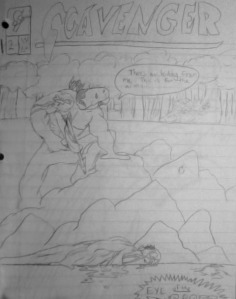 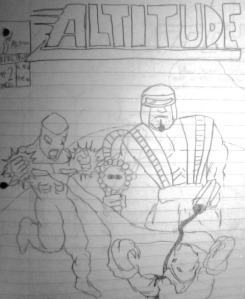 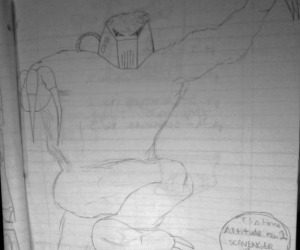 Congo, a beast restrained no more!
* Scavenger #4 – Don Majewski reveals himself to Scavenger and tells Scavenger of his past. (I: Sickle) Scavenger vs. Sickle part 1
* Congo mini-series #2 of 3 – D’shaw will release the hostages if Congo gets a special coolant from the lab. Will Congo break the law?
* Scavenger #5 – After almost killing each other, Sickle and Scavenger realize who the real enemy is: Don. 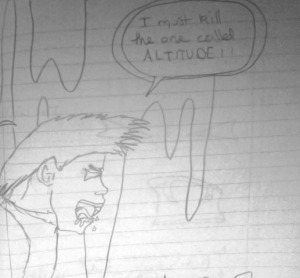 I didn’t show this vampire again, but he never found Altitude…
* Spectrum Spotlight #1: The 3 (O+I: Stalagmite, O: The 3) The 3 vs. Stalagmite.
* Congo mini-series #3 of 3 – Congo jumps out of the building saving the hostages. No sign of D’shaw. 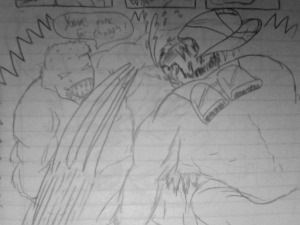 …’cause Congo beat ‘im to it!
* Scavenger #6 (I: Gorgs) Don M. sends out his fleet of stealth robots (Generally Organic Robot Gear System, or G.O.R.G.S.)
* Spectrum Spotlight #2: D’shaw. What happened to D’shaw, you ask? A cybernetic body, that’s what. 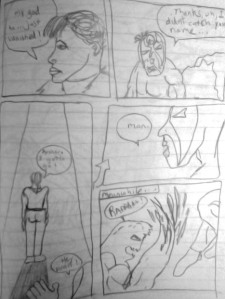 Whoa, fanservice! Lookit Archer’s bountiful buttocks!
Boy, I don’t know about you but I’m beat. Seeing that babe Archer up there really took it out of me! She looks kind of like Hilary Swank, doesn’t she?