If you ever want to feel good about your whole life situation, sit down and watch a couple dozen episodes of the Fist of the North Star TV series. That’s basically what I spent 90% of the weekend doing, and it even managed to make lying in a pool of sweat in my sweltering jungle of a bedroom seem like some kind of sweet paradise.

I finally bought all the sets, and they’ve already managed to warp my malleable mind in new ways. I think I’m on episode 43 or so now. I’ve never seen this far into the show, and I only have the first five volumes of the color manga releases. Fist of the North Star is mostly interested in taking Kenshiro’s tale of loss and rage and twisting it down a spiraling staircase of savagery. The series brazenly spits in the face of geography. There’s no way to tell how far Kenshiro has traveled, unless you just want to gauge it as “really, really far.”

That sounds about right. Every city looks roughly the same. The closest Kenshiro’s journey comes to any semblance of geography is a wide shot of the city of Cassandra, famous for its prison in which the mighty Ken Oh, AKA Raoh, has locked up all the mightiest martial arts practitioners. The wind whistles with the sound of devils crying. One can imagine there was some kind of traveling involved in going from A to B to C(assandra), where this dude runs shit. 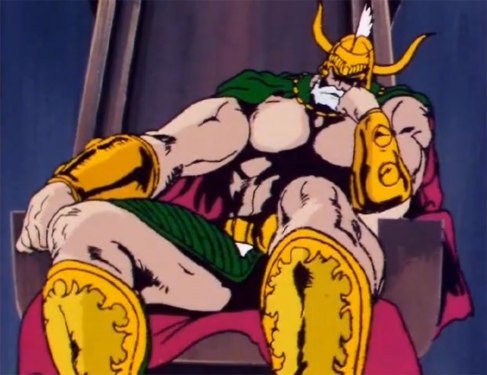 Yea, that’s the Warden of the prison. He’s massive. Which brings me to another thing Fist of the North Star doesn’t give one rip about: Scale. In one frame a dude will tower over Kenshiro at roughly 30 feet tall, stand at 9 feet in the next, only to return to the 25-30 foot range a moment later. It’s great. Did Buronson or Tetsuo Hara ever get to the reason behind all the super-size dudes in the series? I don’t really want to know, just curious. Maybe it’s radiation, or maybe these dudes just got hella buff after the nuke dropped.

Anyone who’s seen more than a few episodes knows that Kenshiro’s shirt ripping off is a great piece of recycled animation used in almost every fight. No, really, here’s a montage someone made:

In one episode there’s this really casual shot of Kenshiro repairing one of his shoes while he pines over his recently lost love, Yuria. A quick scene of him sewing together his favorite shirt would have shut a lot of people up, but maybe I just haven’t gotten to that episode yet.