It’s no secret that Sam Alden is an incredible cartoonist. Like other top-tier talent, he eventually made his way to storyboarding for Adventure Time, which is like the mothership for people who are great at comics. This post isn’t about Finn & Jake, though, it’s about Alden’s 2014 Study Group Comics release Haunter, a 96-page journey that reads like a dream.

Anyone who regularly follows Alden’s work is probably like, “yeah, DUH, Haunter is rad as hell.” After all, this was his first long-form work, but it’s also something I just happened to stumble upon at NYC’s Forbidden Planet. The story follows a young woman who runs into an ancient evil while exploring, and from that moment on the two are entwined in a fierce hunter x hunted chase.

As the title of this post suggests, Haunter is a completely wordless comic. These are tough enough to pull off even marginally well. Comics are by no means dependent on dialogue or narration, but without them you really need someone who specializes in visual clarity. Alden demonstrates his skills as a soon-to-be storyboard artist with a comic that flows perfectly from moment to moment. When the action picks up, your reading pace follows suit naturally, and Haunter takes a few opportunities to dial it down and change the timing of panels to what’s practically a frame-by-frame piece of animation. 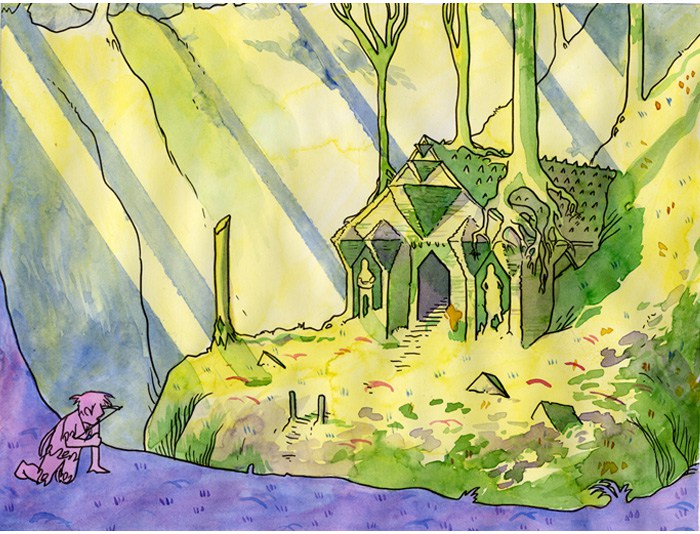 Sam Alden is some kind of wizard with brushes and watercolors, or whatever was used to create Haunter. Streamlined characters intermingle with deep environments, and the stark black ink outlines are used to great effect, almost like an animation cel. The color scheme is reminiscent of Katsuya Terada’s classic Zelda art. Appropriately enough, it’s also been compared to a video game. I can see that; it has kind of a Fumito Ueda (Ico, Shadow of the Colossus, The Last Guardian) vibe to it.

The act of reading Haunter flies by in a flash, but it’s also a comic I’m more likely to revisit from time to time. Do yourself a favor and pick up this and pretty much anything else by Sam Alden. I also highly recommend his Frontier book, which is available from Youth In Decline. Actually, it’s out of print, but maybe you can dig around and find it somewhere. That’s half the fun!

His site isn’t showing up at the moment, but you can check out more of Sam Alden’s comics on his tumblr.