One of the most important ingredients to making the player horrified of an inevitable boss encounter is liberally inserting the boss, or hints of the boss, throughout the areas before the battle.

You would see this sometimes in old school games; you might catch something stomping around in the background, obscured by sexy parallax– then, at the end of the level, BAM!

But this technique has been employed most effectively in survival horror games. Here are two choice examples: 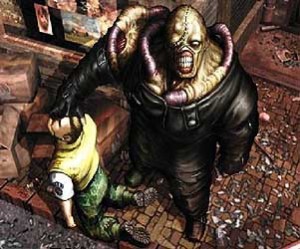 The best part about this game is that Nemesis was the most terrifying thing in it. He chased you relentlessly and was always just a step behind. You knew damn well that you’d have to beat his ass in some epic boss battle sooner than later. 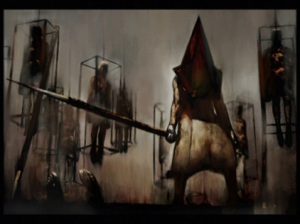 The very first time you see this hulking man-thing is something that probably scarred gamers for years. From the confines of a closet, trying not to breathe too loudly, you witness this jacked-up monster sort of… raping a mannequin monster? It’s really messed up. This is one of the best entrances ever used to foreshadow an eventual boss battle. We won’t even get into the whole psychological aspect of Pyramid Head’s presence, but he’s one of the many reasons that SH2 is the best in the series.