Here’s a screenshot from the rare gem Slamm Nation, a somewhat glitchy Slamm Dunk action game cassette released for the Nintendo Entertainment System in 1986. It was given a Nester Award for its “slammin’ graphics” (Nintendo Power, May/June ’97 pg. 47), but was also heavily criticized elsewhere for its somewhat dubious boss battles and confusing level design.

The highlight for many, however, was the victory animation that followed each boss. Unfortunately, this was ripped off wholesale by Konami with their 1987 game Double Dribble, and the press as a whole turned a blind eye. 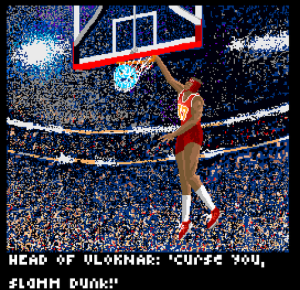 You be the judge!